Opening up my process of knowledge in the making; fragmentations as narration.

One of my aims during my PhD is to make my research process transparent and open. But as a researcher working in the humanities, I don’t want to conform to norms of ‘transparency’ and ‘openness’ that serve as a top-down surveillance mechanism for academic labour and policing (mis)conduct. Rather, I want to contribute to the use of digital technologies as a means to communicate the internal contradictions and struggles of research.

Open Science has made the rounds in the last years as the new research ethos of the natural sciences and has especially been taken up by those working in quantitative and experimental fields (with highly normative banners such as “Open Science is just science done right!”). Despite my reservations about Open Science being overly focused on methods, I want to contribute to making the humanities more open too –not in the same way, but by reappropriating tools and ideas from the natural sciences and fitting them to my research needs. Concretely, I am constructing a sort of ‘open lab book’ on GitHub, with annotations of my readings and the interpretations of sources. It’s still an evolving project, and I haven’t yet figured out what is the best way to present it. At the moment, it seems quite messy and not very useful for anybody who isn’t me… For now, this lab book of sorts allows me to have a centralised and referenceable body of work-in-progress, which turns writing my dissertation as a gradual, patchy, everyday activity.

I am using a Zettelkasten method to take notes, adapted to my research needs and the fact that my research deals with different kinds of reading material (primary sources, secondary literature, and my own notes). At large, I differentiate between two kinds of notes: reading notes and concept notes. Reading notes are those that I take while reading a paper or a source (I do treat differently secondary from primary source reading, but I won’t go into details here). My reading notes are fairly common, just thoughts and questions that come as I read. The difference, perhaps, with more traditional ways of taking notes is that these ‘raw’ reading notes are connected with other reading notes (perhaps another paper with a more nuanced argument) and concept notes. The Zettelkasten method puts the emphasis on making these concept notes ‘atomistic’ and highly interconnected. I think of them as ultra descriptive and to-the-point paragraphs. In fact, the idea is that concept notes could actually end up becoming a paragraph (or two) in a paper or in my dissertation. Making them so descriptive forces me to take an interpretative position, and it invites me to think about what is the most important aspect of a section of a paper I read. Concept notes contain only one idea or claim, and they are connected with reading notes or other concept notes, giving support, refuting or nuancing the statement.

For example, let’s take my readings of the introduction chapter to Endangerment, Biodiversity and Culture, the 2016 volume edited by Fernando Vidal and Nélia Dias. My reading note’s filename is 2017-Vidal and Dias.md, and it contains all that you would expect from a traditional reading note: some metadata, a take-home message (i.e., what I thought was most striking or important about it), followed by excerpts from the reading and my commentary. Among those excerpts, we find: 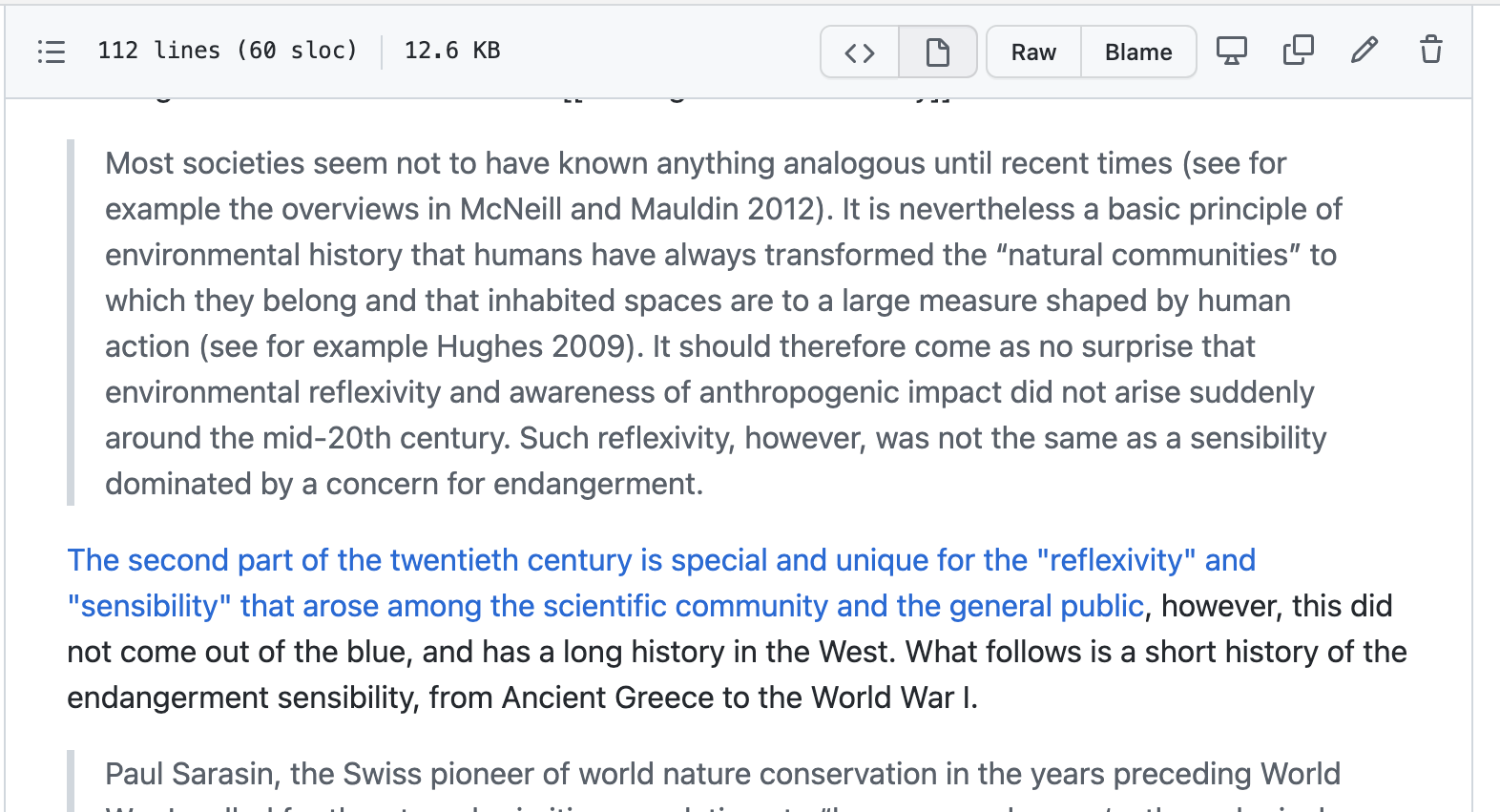 The commentary contains a hyperlinked text: “The second part of the twentieth century is special and unique for the “reflexivity” and “sensibility” that arose among the scientific community and the general public”, which links to a concept note called (the title of the note has changed since I first wrote it: this dynamism and evolution is precisely the point): the second half of the twentieth century was unique in a rise in the collective environmental reflexivity and sensibility. This concept note looks like this: 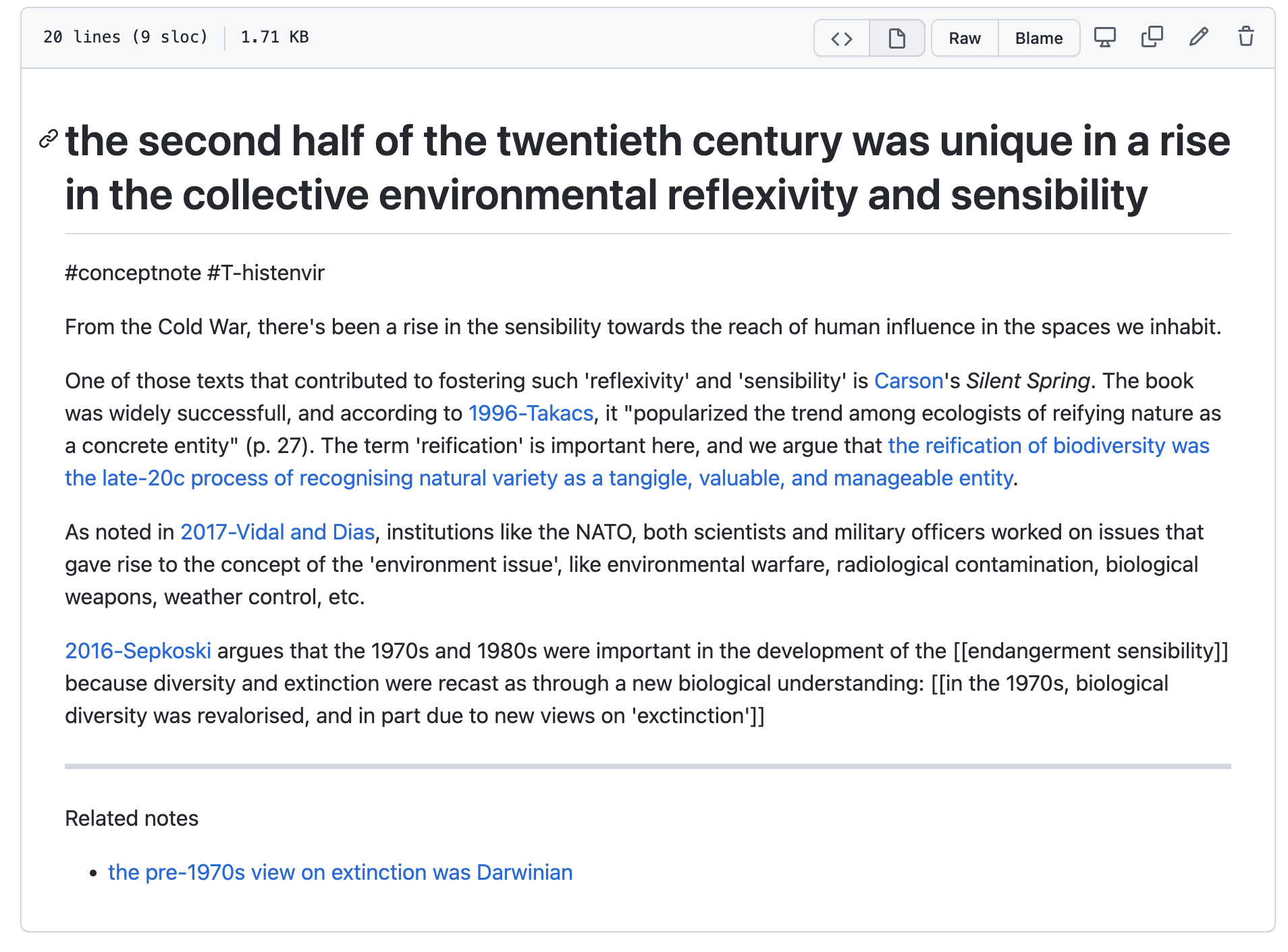 We can see how this note starts to look a bit like a paragraph. In this concept note, I wrote down my interpretations from reading the work of Vidal and Dias and their contribution to the statement about the ‘rise in collective environmental sensibility’. But what’s cool is that I can also add other interpretations of readings of other authors. We see references to other reading notes, like 1996-Takacs (a classic STS/phil of science monograph on the origin of the concept of ‘biodiversity’) and 2016-Sepkoski, a chapter in the edited volume Endangerment, Biodiversity and Culture. And of course, it’s connected to other concept notes: the reification of biodiversity was the late-20c process of recognising natural variety as a tangible, valuable, and manageable entity and the pre-1970s view on extinction was Darwinian.

Perhaps now we can start seeing the ambitions of this method. It allows you to write paragraphs as you read, and to have them always referenceable so that you can contrast them with interpretations of new readings, and eventually, interpretations of your sources. In this way, I can connect sources-interpretations-literature, displayed as a large network of highly connected simple notes. The network, as well as the individual notes, change over time, which I think best represents knowledge-making as a dynamic process. Using these digital tools allows me to take full advantage of this conception of knowledge - an ever-adapting and connected set of fragmented insights. Behind any paper, any conference proceeding, or even a monograph, there’s always an interpretative practice that departs from a multitude of plural readings. Confusion, nuance, and contradiction are part of any research practice. But this plurality is rarely presented as a research output. Behind the appearance of coherence, we find fragmentation.

I am not claiming that all research is misleading. I am actually not concerned about or interested in research misconduct. What I want to explore, however, is how we can make convincing stories from partial readings. While the Open Science in the natural sciences has focussed on hastily finding solutions for the replication crisis, running alarms bells of a deflating truth, framing the issue of lack of replicability as a methodological problem with a methodological solution, I want to take the non-replicability as a matter of fact, as a reality that those of us who want to make explanations about the world have to engage with, not eliminate or sweep under the rug. These digital tools, for me, offer an opportunity to see how my readings are contradictory, have holes, and present a coherent picture only as long as there is an active intention to construct a narrative.

back to all blogs